After skiing all day, when lifts were closing, he shouldered his skis and hiked the snowfields high above Timberline Lodge or Mt. Hood Meadows (when this was legal).

As the sun began to set, he clamped into his bindings, gave a hoot and holler and headed for his car, 3,000 to 5,000 feet below, arriving just before dark.

It was the perfect last run.

Noble will soon be making his very last run.

Diagnosed with an incurable disease, the Portland man who epitomized adventure sports in Oregon for more than four decades knows the end is coming. Noble is gradually losing control of his muscles due to ALS, the disease named for New York Yankees star Lou Gehrig in the 1930s. 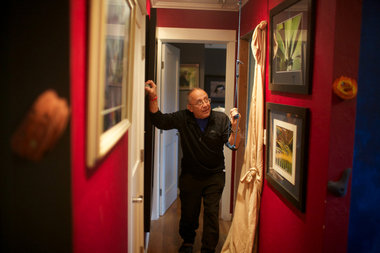 During his prime, Noble skied more than 7 million vertical feet using helicopters as the lift. But even more amazing is the enthusiasm he showed for deep powder skiing, windsurfing and paragliding, three cutting-edge sports he pushed to the limits in venues around the world.

His travels took him to 85 countries, not to gawk as a tourist, but to ski, sail, dive, climb or fly.

And he brought along friends just about every time — hundreds of friends over the years.

Noble is using his myriad connections to plan one last bash, Ski to Defeat ALS, a fundraiser for the Oregon and southwest Washington chapter of the ALS Association. He plans to raise $100,000. “No sweat,” he says.

ALS (amyotrophic lateral sclerosis) is a progressive degenerative nerve disease. It is rare (about 500 people in the Oregon chapter have it),  and has no known cause or cure. The drug Riluzole lengthens life expectancy but only marginally. Most diagnosed with ALS die within two to three years.

At 74 years of age, Noble doesn’t expect to be an exception.

“Life for me has been one big adventure,” Noble said. “Now I find myself bedridden or in a wheelchair. In reality, ALS is pretty grim, but I don’t want people to feel sadness or pity for me.

“Most people diagnosed usually feel depression, denial, anger and then acceptance. I skipped the first three and went right to acceptance. I’ve done everything in this life I wanted to do. I just want to help the ALS association make a pile of money before I go.”

Noble learned of his disease in late 2010, months after he noticed himself stumbling occasionally around the house. He chalked it up to old age but eventually went in for tests.

“It was the kind of thing where I hoped they would find a curable brain tumor or diagnose Lyme disease,” he said. “That sometimes mimics ALS.

“I always thought I would die a violent death. I’ve come close many a time. But no, they found this. At least it gives me time to say goodbye to all my friends.”

And his friends go beyond the world of adventure sports.

“When Fred comes in the door, everybody in the place lights up. We love to see him,” said John Underhill,  general manager of Noble’s favorite Portland restaurant, Jake’s Famous Crawfish. “He’s been coming here for more than 25 years. He’s a personal friend to most of our staff. At some time during the evening, everyone comes by to continue the relationship.”

Noble’s most enduring legacy, besides introducing so many to adventure sports, is his work with the Columbia Gorge Windsurfing Association.

“Back when Fred started windsurfing, he and his buddies started poaching a place we now call Rowena,” said Patrick Quigley  of Hood River, a longtime association member.

In the early ’80s, the undeveloped state park had a dangerous railroad crossing. So rather than cutting through barbed wire, Noble asked around to see whether he could improve the situation.

It became the first of many windsurfing projects he spearheaded, tapping into the sailing community’s many private resources and willing volunteers.

Beyond the tow lift

Skiing has always been Noble’s biggest love. He was hooked as a teenager at Franklin High School in the 1950s, when he started on one of two rope tows at Summit Ski Area in Government Camp. He remembers toiling on the beginner tow, envious of those riding the other tow and considering them “pros.” That just made him want to become a pro.

A stint in the U.S. Army followed high school, then he began a working career servicing transmission lines and other high towers. Work was mostly seasonal, which left him time to ski.

Within a few years, he was launching off cliffs in three of Warren Miller’s annual ski movies. He became and remains the North American sales agent for Canadian Mountain Holidays, the world’s leading helicopter ski operation with backcountry ski terrain in British Columbia larger than Switzerland.

“I won some silly award for ski photography that was presented at the 1980 Warren Miller movie,” Sanford said. “Fred was the movie’s MC for many of those years, and we became friends.

“Fred was always on the lookout for doing something new or different. He should be dead a half-dozen times, just from the things we did together in Aruba, Chile and Brazil.”

Fred vs. the ski patrol

Noble has been married three times, but his constant drive wore out relationships. His daughter, Julie,  and her husband, Gary Bakkala, of Salem, are helping him to the end.

Recently, they joined him for a day of skiing at Mt. Hood Meadows, where Noble used a device called a sit ski. It allows those who can’t control their legs to glide down a run in a chair mounted to twin skis, using outriggers attached to the arms to maintain balance.

It was a far cry from the way Noble used to ski at Mt. Hood Meadows, a resort Noble skied on opening day in 1968.

“Our ski patrol is much better because of Fred,” said Dave Tragethon,  Meadows spokesman. “We’ve had to adapt our training and techniques specifically to keep up with his antics.”

Noble used to poach closed parts of the ski area, before the Shooting Star and Heather Canyon lifts were built.

He remembers skiing out in the woods once and hearing a voice from the chairlift: “Noble, I’m coming after you.”

To avoid losing his season’s pass, Noble outskied the head of the patrol, dashed into the lodge, ordered a pitcher of beer and took off his boots. That gave him plausible deniability of being in the woods, once the patrol chief caught up.

That was just another day on the slopes with the Fredinator, his nickname that will be used in a book on Noble’s life being written by Phil Favorite and a documentary under production by Andrea Johnson.
Read original article by Terry Richard »